I have to say, this was one of the funnest trips I've had in a while. The weather was overcast and cool, which makes the experience much more comfortable. We still got tired and overdid, and it's still taken us a while to recuperate. But we came home in good spirits. And that was really nice.

We were actually ready to go when the pet sitter got here Thursday morning. Getting packed the day before was a big help. Last year, I was in the shower when she arrived. This year, the Bronco was packed and I was dressed. I gave her the final instructions, then off we went. The drive up to Anaheim was smooth and uneventful, the way we like it.

Once there, we didn't go to the hotel, but pulled into the parking lot. For the first time since the construction of DCA, we got to park in the lot by Disneyland. Brian had the certificate for the passes (if you read my diary, you may remember last year when we had such a bad time and I wrote to Disney's Customer Relations complaining about the attitude of many of the cast members at Disneyland; over the course of the following year I corresponded with CR and eventually ended up with this certificate for seven complimentary four day park hopper passes, worth $141.00 each!) and our first order of business was to exchange the certificate for the passes. Our friends were due in later that day and we thought it would be best to have the passes when they arrived, to save time waiting in line.

There was only one family in line ahead of us and I had my Disney Passport ready as my ID. I slipped the certificate and passport through the window. The woman looked at my passport, up at me to compare the picture, then read the certificate to herself. Then she looked at me again. Then she read the certificate outloud. Three times. She called another cast member over and showed her. She asked me how I got one for this many passes. I explained what had happened last year and how surprised I was to have gotten this. She said she'd never seen one for this many. I knew we were special. *grin* She gave us the passes and we decided to head over to check in to the hotel. We wanted as much of this out of the way as possible.

We entered Disneyland first, not having had anything to eat since an early breakfast. We had lunch at Carnation on Main Street, and lunch was good. We then left Disneyland and walked to the hotel through Downtown Disney. The lobby was fairly empty and there was no waiting for check in. Nice. A good sign. Or so I thought. When we were shown the map to our room, it wasn't what we'd expected. I had made these reservations a year previously so that we'd have a room overlooking Downtown Disney. This room was nowhere close to DTD. And it was by an elevator. Most definitely not acceptable for a three night stay. The check-in CM (cast member) explained that the elevators weren't noisy, and Brian explained right back that where there are elevators, there is traffic. And we didn't want to hear the traffic walking by our room at all hours of the day. And Brian was really upset that we weren't in the room, or at least close to the room we'd had on our September trip. I agreed. After all, we were paying over $300.00 a night for this room (after taxes and valet parking were figured in). It was supposed to be one of the better rooms. This was going to be a huge disappointment. I mean, huge. And totally unacceptable. The CM left to go see what she could do about it and to find out exactly why there were no rooms available on that side of the hotel. She came back and told us that there was going to be a walk in the early morning hours that weekend for a local heart association, something called the "ChalkWalk" I think she said. Brian's question was why wasn't this told to us three weeks previously? She didn't know. Anyway, we ended up in a third floor room, overlooking the Golden State land of Disney's California Adventure, the Grizzly River Rapids side. I was quite pleased, to be honest. Brian would have been happier if we'd been on the fifth floor, but this room was acceptable to him. 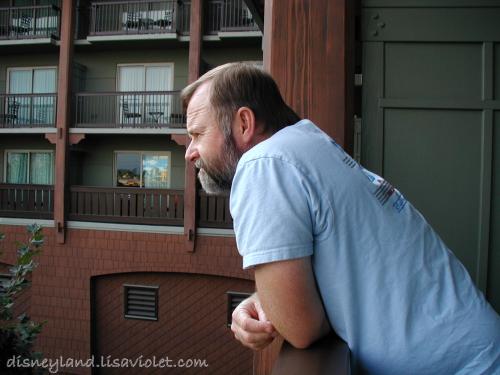 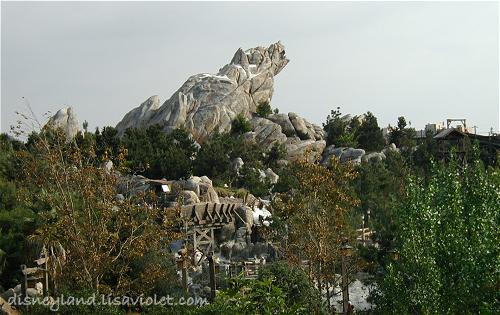 A room with a view

1996-2002 ©lisaviolet
Photographic and graphic images are the property of lisaviolet, and may not be copied, printed, or otherwise reproduced on any other site without express written consent.